My month as a volunteer in Poland during Euro 2012

I love football. It’s something with that sport that unites people and nations while kicking the ball on the pitch. Since my move from Stockholm, Sweden to London, UK my passion for football radically increased. All of a sudden I could go to Emirates Stadium and watch my favourite team Arsenal play every week, or at least how long I could afford the expensive tickets. Almost too late I made a decision to apply to be a volunteer during UEFA Euro 2012 in Poland/Ukraine. The UEFA volunteer applications were closed, but it was still possible to apply as a Host City volunteer. Then where to go? Warsaw, Wroclaw, Poznan, Gdansk, Kharkiv, Donetsk, Kyiv or Lviv? Poland or Ukraine? The only city where I’ve got a friend living is Poznan in Poland so that’s where I applied for. Too late I checked what matches were played there and when I saw it was Italy, Croatia and Ireland, I felt disappointment. Boring football in Poznan I thought. I have never been so wrong. This is my story about my month in Poland during Euro 2012 where I was part and created history. 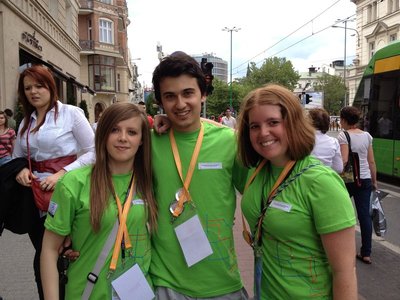 Poznan as a host city

Have you heard of Poznan before the Euro tournament? Probably not. Poznan is the fifth largest city in Poland with around 550 000 inhabitants but if I hadn’t been working with 3 people from Poznan in Scotland Highlands last summer I’d never had known that Poznan existed. Its location is not very strategic, but good connections with Berlin and a brand new airport terminal and expanded train station, it’s quite easy to get there. But it all depends where you are going of course. When I write this blog I’m on my second train out of four to reach Halmstad in south west Sweden, 4 hours into my 15 hours journey to get home. 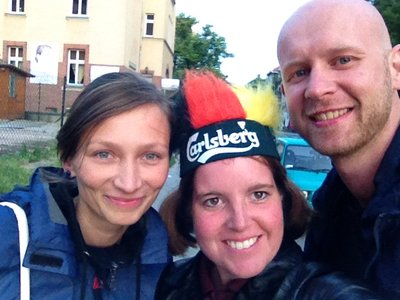 In Poznan there is a beautiful square called Stary Rynek (Old Market Square) with the stunning Town Hall in the middle and cozy old houses painted in different colours, all with restaurants and bars at the bottom with terraces and umbrellas. Just a few minutes walk from Stary Rynek at Plac Wolności were the Fan Zone located, and that’s where I was volunteering during my weeks in Poznan.
A Fan Zone is an area where anybody can enter to watch the matches on big screens, listen to concerts and loads of entertainment as well as possibilities to eat and drink. The Fan Zone in Poznan could host 30 000 visitors in one day, but when the Polish matches was played the Fan Zone was always full. 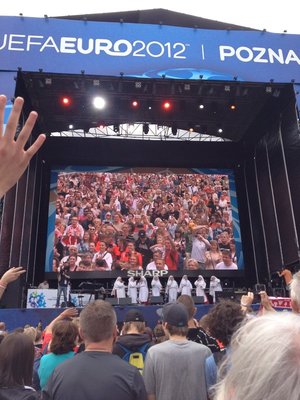 The football fans in Poznan

When I’m thinking back of the Irish football fans in Poznan I get all warm inside! The love they feel for there nation, the beautiful songs the sing from early morning to late night, their positive attitude through losses at the pitch and the extremely sexy Irish accent is incredible. I can by far say that their presence changed me forever. I’ll tell you why. 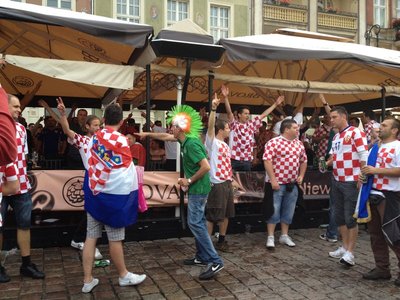 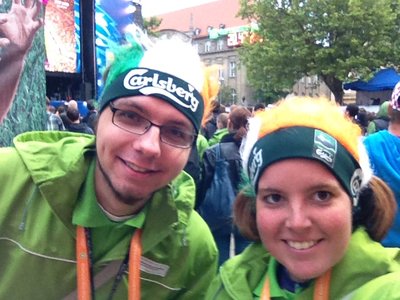 During the Euro 2012 I was wholeheartedly supporting my national team, Sweden, for the first time in public. Before the match against Ukraine I had Swedish flags painted on my cheeks and I also managed to buy a small Swedish flag to wave with when I went to the Fan Zone. I managed to forgive France after a 13 yrs boycott when the French hosted the World Cup in 1998 and won against my favourite team, Brazil, and the biggest evidence of this was that I watched the Sweden and French games with two French guys. It’s all forgiven now. Anyway, when Sweden lost against Ukraine I felt devastated, humiliated and almost depressed. I was angry that I have to support a shit team like Sweden and after the match I went straight to the hostel to drown my sorrows. A few days later I watched Spain – Ireland in the Fan Zone while working and my volunteer friend and I had Irish headbands to show our support. When Ireland was 3-0 down to Spain an Irish man was approaching to me and Michał and thanked us for our support. When he got back I told him I was sorry it wasn’t going well for Ireland and what he did almost made me cry. He said: “Do you hear any Spanish chants?” I said: “No.” and he smiled and started to sing: “3-0 and you still don’t sing!” For me, that changed my attitude forever. Ireland lost 4-0 against Spain but the Irish were singing much louder than the Spanish fans and “Stand up for the boys in green” was the only thing you could hear. 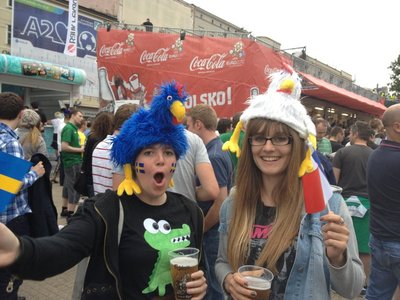 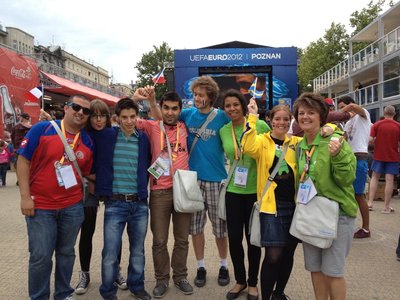 There were about 50 000 Irish supporters visiting Poznan, all of them singing all the time and drinking massive amounts of beer. The atmosphere between rival fans was brilliant were Croatians, Irish and Polish fans were singing, dancing and drinking together and there is not enough words for me to tell how much that affected me. It was magical! True love for football, party and each other!
Poland as a host nation. 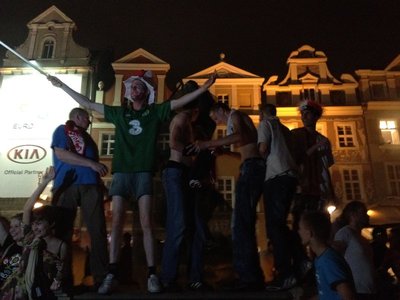 When I talked to my Polish friends in London they were all a bit scared about how the tournament would go. Racist attacks, football hooligans and lack of great infrastructure made my friends to worry. When I arrived in Poznan on May 30, 10 days before the opening of the tournament, nothing was finished! The Fan Zone looked half finished, Rondo Kaponiera , the main hub for trams and buses was closed and trams was on diversions. On June 7, the day before the opening of Euro 2012, Rondo Kaponiera repopened and the tram lines changed completely. Oh the confusion! But it worked! Everything was finished in time for the Euro, but not with much margins.

The Polish people are very proud of their football team and also about them hosting such an important mega event and they really should be! I am so proud of being part of this great event and I am so proud of Poland and Ukraine who did an excellent job to host an unforgettable football tournament. The fans I talked to in Poznan all loved Poland and the Polish people and would love to come back, and that is what it’s all about! To change the attitude that Poland and Ukraine are less developed Easter European communist states (trust me, people are scared of visiting and every time I hear it I get very upset!).

I watched almost every match in the Fan Zone in Poznan except for the Polish matches where the Fan Zone was always full and I wanted to watch the matches with my friends who couldn’t get in. But it was incredible atmosphere when Polska played and I’ll never forget the party on the streets in Poznan when Poland drew 1-1 with Russia! The Polish supporters celebrated like they won the Euro final! It was fantastic to be part of that! 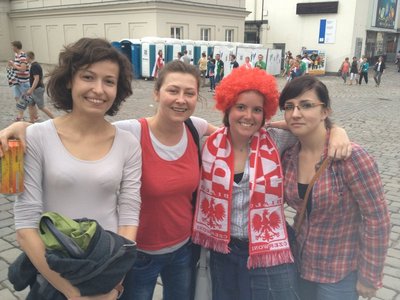 My volunteer friend Ola and I tried to get our hands of cheap tickets to the Ireland – Italy game, and travelled with the Irish on the bus to the stadium and sang with them. Fabulous! We did have the best of times that day even if no one wanted to sell any tickets for less than 100 euro. But we were happy anyways and celebrated with the Irish at Stary Rynek instead. 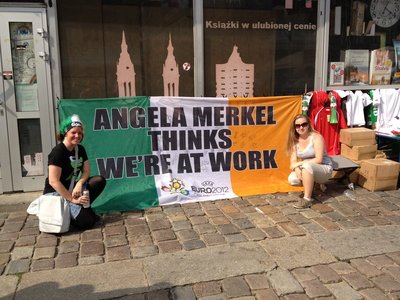 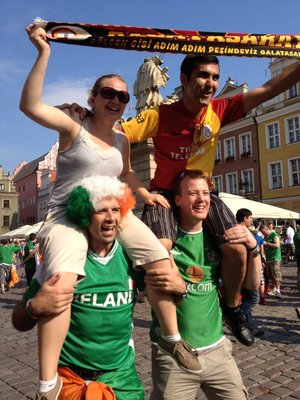 I wrote before that I was humiliated when Sweden lost against Ukraine because I felt they didn’t try and played like shit. But while watching the Irish fans pride even if the Irish team sucks, I learned something! There is no need to be depressed! And after that I was a proud Swede, not just because of my change in attitude, but also because I liked the football Sweden played against England and especially France when we beat Les bleus with 2-0! Even if we were out, I was still smiling.

Then my favourite teams exited the Euro one by one. No Sweden. No Ireland. No Poland. No England. No Germany. What we have left is Italy and Spain. I don’t want Spain to win, since they are already world champions and they don’t deserve to win. But Italy, I said during the entire tournament that I hate Italy, but this was a true wake up call for me, because Italy no more plays boring defensive football! They are very offensive and are dangerous all the time they get the ball and I must admit that I’m deeply impressed and I was wrong. For me Italy are worthy winners of the Euro 2012. I write this the day before the final. 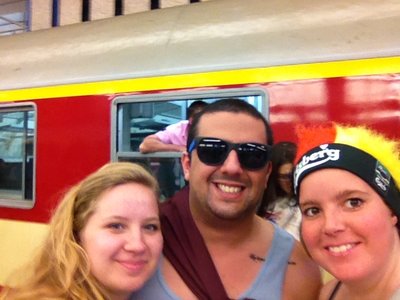 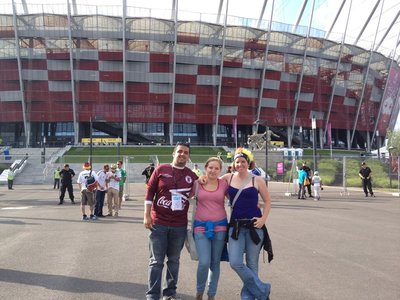 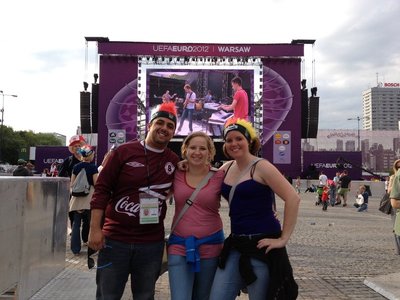 When the Irish supporters went home to Ireland Poznan turned dead and I got sort of depressed of the over night change from most incredible atmosphere in the world to nothing, so I wanted to go home. Then I made up the great idea, why not go to Warszawa on the day of the semi final, the last match in Poland, and watch it with the Germans and Italians in the capital’s Fan Zone? I thought I might have to go alone, but in the end we were 9 people going there, 3 by train (me, Ola, Ronald), 4 by bus (Soner, Koray, Natalia, Magda) and 2 hitchhikers (Paulina and Piotr). We all managed to get to Warszawa in time for the semi final. It was a hot day and I was seriously happy, then it happened! My Costa Rican friend Ronald bought 2 tickets to the semi final and he didn’t manage to sell the second one so he decided to sell it to me cheap. That was one of the most magical evenings in my life! To be inside the beautiful stadium in Warszawa, watching the semi final in Euro 2012 live, me supporting Germany and Ronald supporting Italy was incredible! I can’t describe that feeling with words but it meant the world to me! I will forever cherish that moment and be grateful for my friend for giving me the opportunity. 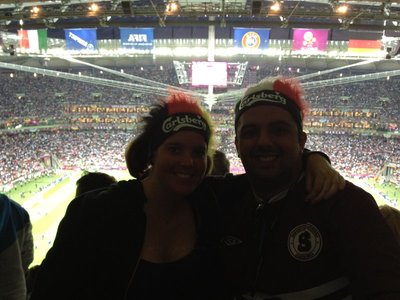 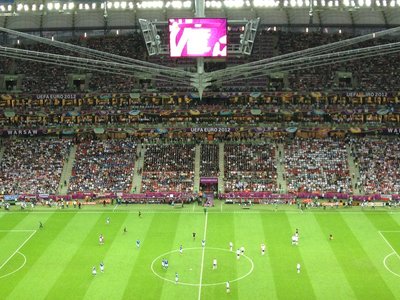 I would first of all like to thank my great friend Ola P for making my spare time memorable with inviting me to her flat and to her family house in Krotoszyn! It’s been a pure pleasure all this month and I miss you to bits! Lots of love to you and your lovely family. 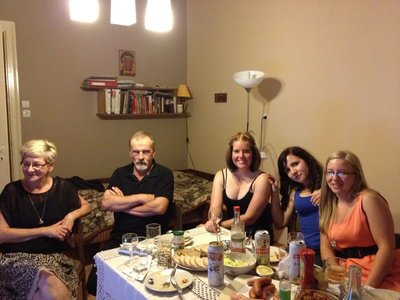 Secondly I’d like to thank my volunteer friends who made the stay very enjoyable and fun. Especially thanks to Ronald, Ola B, Soner, Koray, Ela, Matteusz, Piotr, Paulina, Rita, David and Koko. I’d also give a big thanks to Lois for hosting all us international volunteers for dinner one night! 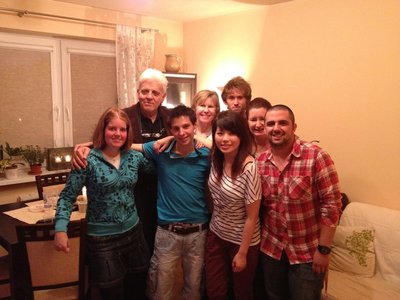 Thirdly I want to thank all the happy and funny football fans in Poznan and Warszawa that crossed my path. You are all fantastic! 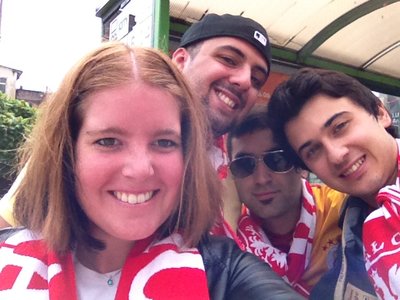 You summed it up so well, Clara. I'm glad you made it to a match! It was a pleasure getting to know you and our other new friends.

Comments on this blog entry are now closed to non-Travellerspoint members. You can still leave a comment if you are a member of Travellerspoint.

If you aren't a member of Travellerspoint yet, you can join for free.